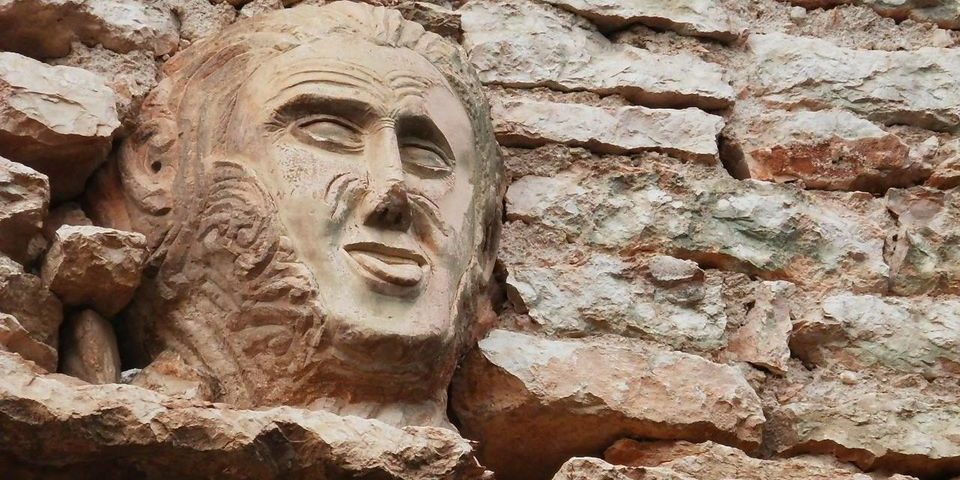 There are five of them and they look at you with big eyes.

The first has a wise appearance, wrinkles on the forehead, a fine nose, a long beard, from a figure like this you expect advice, perhaps on your journey among the stones of Lessinia.

But no, irreverent sticks out his tongue, seems to mock those who observe him or simply finds himself passing by.

The second has thick eyebrows, a shorter but bristly beard, reminiscent of a leader, if you imagine him detaching from the rock and manifesting himself in flesh and blood, you might think you would see a daredevil appear, a strong man who perhaps fought for his lands. ..

but he too, leaning on his lower lip, shows his tongue!

A language carved in space and time, a language in Prun stone.

Then there is the woman, it seems that we have disturbed her: under the hood she holds on her head, curly hair or perhaps curlers emerge? But she is not ashamed to show herself on the threshold, together with the others, and indeed shouts something.

The mouth is wide open and seems to warn the traveler, who knows what that means …

Then here is the fourth, this is more bizarre, he too shows his tongue but it is curled backwards, his nose is squashed, who knows if it is the effect of time and atmospheric agents or maybe this was a boxer and what he shows you between the lips is the mouthguard.

He too seems to warn the passer-by, we don’t see his hands, we can’t know if he’s threatening him even with a closed fist.

Finally, from the rock emerges the face that looks like a giant, large eyes, ears and neck sunk into the stone and a line instead of the mouth. He seems to tighten his lips tightly and with wide open eyes threaten those who look at him.

This is just an imaginative interpretation of a mystery from Lessinia, that of the Cerna stone masks .

It is said that these masks are there, in a row one after the other on one of the ancient stone houses in the town to drive away evil spirits, who knows how long.

To visit this place, just go to Cerna after visiting us at Veja Adventure Park.

If you go there, write us your feelings at the sight of the masks, have a good trip and the next wonder of the Lessini mountains.

Thanks to “Hiker by chance” https://www.facebook.com/escursionistapercaso/ from which the cover image.