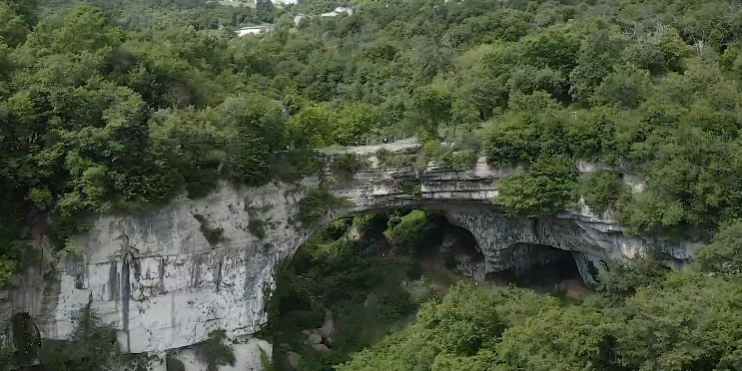 Today we take you on a fantastic journey that has as its protagonist the Ponte di Veja , therefore set right here a stone’s throw from our Adventure Park , but 100 thousand years ago!

“The pouring rain poured relentlessly and Hug hid among the trees, he was already soaked but he didn’t want to let go, his prey had been wounded, he had reached it with one of his sharp flint arrows.

Everyone knew it, Hug was the most formidable arms builder in the area and this time too he had proved it.

The blade had struck mercilessly and the beast had managed to escape, but it couldn’t have gotten very far, Hug knew.

Meanwhile, the weather showed no signs of improving and night would fall within an hour, he had to hurry.

He took courage and jumped, without fear, landing on the river bank, he shouldn’t have fallen into the water, the current was too strong, if he had slipped he would certainly not have been able to resist and would have been dragged downstream.

Instead, he had to hunt down that animal, he had seen it escape into the cave, he could no longer escape it, he would have found it.

He started running in the torrential rain, it was freezing at that altitude and at that time of the year and skilfully skirted the course of the river down to the bottom, where the huge opening of the cave showed itself in its magnificence.

The branches of the trees banged furiously against the rock, the rain cut the flesh, that gigantic gloomy and scary hole had never seemed more friendly to him, there he would have had a little respite.

He slipped into it, without fear.

The hour was late and the clouds did not allow the little light left to illuminate the cave for more than 30 meters, but his eyes saw like those of his prey, it was an equal fight, he would have found it.

He clung to one of the limestone walls, at least his right side would have been protected from dangers, he walked cautiously, he could not risk cutting himself with some sharp stone, he would have offered that animal the opportunity to balance the wounds and maybe. . run away.

The first stretch he traveled easily, but now the ground climbed steeply and slipped, he could see the bats flying up there, they seemed agitated, something must be under them, perhaps his search was over.

He hoisted himself with difficulty thanks to some protruding rocks and had access to a new level of the cave, it was very extensive but there was almost no light there.

Now he had to rely on his other senses, the sounds in that dark place thundered and even the beating of a bird’s wings could turn into a sinister noise.

He relied on his sense of smell, it was fine, he could recognize the smell of blood among the smell of flowers and mold, he was sure that if he got close enough to that animal, the fresh blood from his wound could show him where to look.

Outside the storm did not seem to calm down and by now even the rivulets that carried the river from above the bridge to the innermost depths of the cave had swollen, he could not see them, but he could hear the lapping of many waterfalls and the more the spray of those improvised streams of water reached him, wetting his face.

It was raining inside and out.

He was tired, he was beginning to think that this time nature would win and would not allow him to recover his lunch, yet he deserved it, after days of hunting and endless hours of sharpening weapons.

While the darkness was preparing to definitively envelop the cave in which a reflection had slipped, it attracted his attention, those were eyes, the faint light that still penetrated the cave was reflected in two terrified eyeballs, at times they disappeared and then returned to reflect enough of it to reveal its presence.

“I found you,” thought Hug.

The strong hand moved and drew one of its sharp arrows from the quiver, even the tip for a moment reflected its part of light, at that moment the eyes of the prey closed for the last time and the bow snapped. ”

And now turn up the volume, put the video resolution on YouTube to the maximum and enjoy two minutes of pure show, here is the majestic Ponte di Veja that is what remains of what was that cave many thousands of years ago.

Special thanks to Michele Corsi of Webstyle4you https://www.webstyle4you.it/ for these extraordinary images.