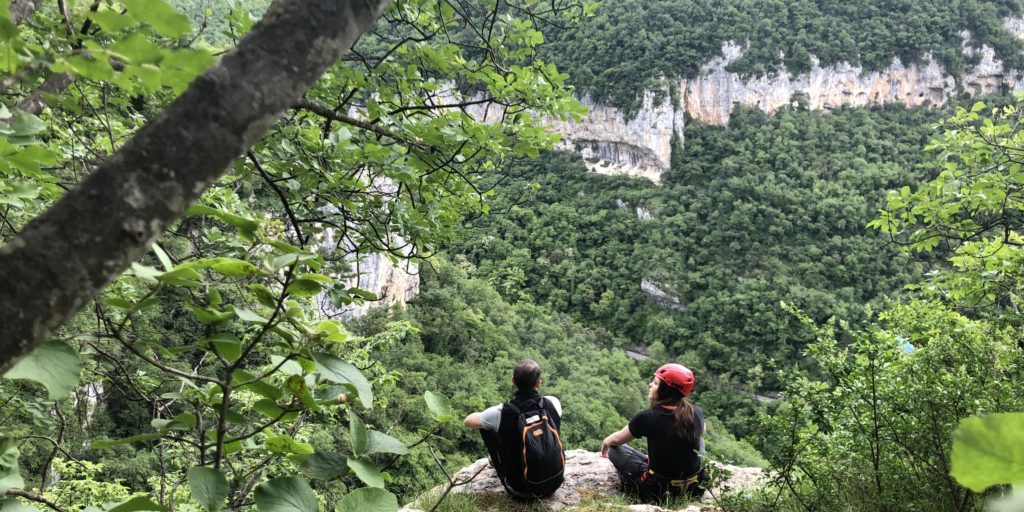 For friends of Veja Adventure Park who love mountain trails today we are talking about an interesting walk, in the mountains of the Lessinia National Park.

A two-minute walk from the park you will find the Ponte di Veja , over which the Italian section of a fascinating route passes: it is the European Path E5 which unravels from the Atlantic coast in Brittany (France) crosses the Alps passing through Switzerland, Germany and Austria, reaching Italy and ending, according to the project, in Venice.

“The total distance is approximately 3200 km.

Currently the Verona-Venice section is not defined, so the path ends at the Verona Arena.

The most commonly traveled part is the one that reaches Verona from Lake Constance: a distance of 600 km for which an average of 30 days are required for a good walker.

This section was defined by Hans Schmidt of Sonthofen and built by interconnecting existing paths by the European Hikers’ Federation which inaugurated it, precisely in Constance, on July 2, 1972.

Although the trail also crosses rocky areas with high peaks, no climbing experience is required.

Along the way there are various possibilities for shelter and overnight stay typically in mountain huts. ”

Do you find it interesting?

Then also read the following lines, where we offer you other suggestions and where you can learn some more information about these places, for those who want to go on an adventure but consciously .

The large parking lot under M.ga Parparo is the starting point of this itinerary that crosses the dense Foresta delle Gosse , one of the most evocative areas of the Lessinia Regional Natural Park.

Following the municipal road uphill that passes the mountain hut buildings, then turn right downhill along the European path E5, which it enters the heart of the beech forest.

The beautiful route would reach the town of Giazza, but near a clearing, turn right following the signs for the Lausen refuge, first reaching Malga Monticello and then the ridge to the panoramic Croce dei Norderi.

The return takes place along the final stretch of the ancient “Via Cara”, a historic transhumance route that from the plain went up to the plateau at the Croce del Parparo.

The itinerary is practicable in all seasons, splendid in autumn and very popular with snowshoers during the winter.

Some technical notes for lovers of details.

Difficulty: excursion itinerary with limited height difference suitable for everyone, which develops mainly on forest roads and access to mountain huts and on marked trails in the enchanting setting of eastern Lessinia.

Accessibility: on foot, by mountain bike and on horseback Length: 7.05 km.

The paths briefly described in these lines are just some of the many that you can discover by exploring the territories of Lessinia, starting as always from our reference base camp: the Veja Adventure Park .